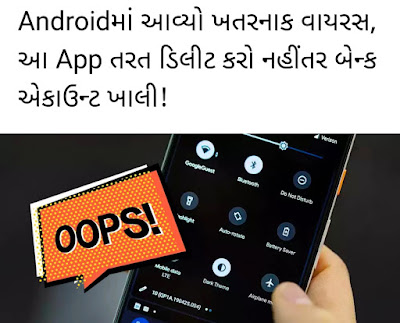 People who download and use any kind of haunting apps on the phone should be cautious. Because your bank account can be compromised at any time. A virus called 'Joker' has recently been discovered to steal money from users' bank accounts through Android apps. This virus is released as a premium subscription and can hack the users account in the name of payment.

About 24 apps have been discovered that are infected with malware called Joker. The 'Joker' virus has been claimed by Android apps to steal money from users' accounts. The premium subscription signup process does the malware silently. Source BY "SANDESH" via Dailyhunt


The malware was discovered by researchers at the cyber security firm CSIS. According to Kuprins Coupins, this malware has been downloaded 4, 72, 000 times. Although the affected apps have been removed from the Google Play Store, there is still a risk for users whose phones currently have these apps installed. This is a complete list of 24 applications, if your phone has any of these, it's best to delete it immediately. Because Google has worked its way, but if your phone still has this app, be aware.